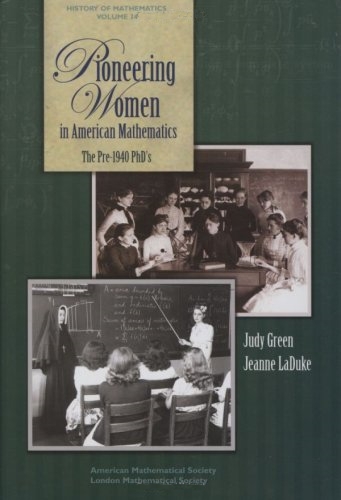 In the recently published volume from the History of Mathematics series, Pioneering women in American mathematics: the pre-1940 PhD’s, Judy Green and Jeanne LaDuke tell the story of Fanny Boyce, one of the few pre-1940s female PhDs in mathematics.

Fannie W. Boyce was born March 16, 1897 near Lentner, Missouri (Shelby County). As a child she moved with her parents, George Wesley and Mary Virginia Boyce, and siblings to Colorado. Boyce attended grade school while in Colorado Springs before the family moved to University Park, Iowa where she attended high school and began college. She attended Central Holiness College (later named John Fletcher College and then owned by Vennard College).

After college she began her teaching career, initially in Iowa high schools. Maintaining her connection to the Quakers, Boyce ceased teaching to obtain a second bachelor’s degree from Penn College. When finished she restarted her teaching career by teaching at Olivet University and Marion College, Nazarene and Wesleyan Methodist schools respectively. She taught mathematics and Greek. She continued her studies and obtained a master’s degree from the University of Wisconsin in 1928. While teaching at Wheaton College she obtained a doctoral degree from the University of Chicago in 1938

Boyce had begun teaching in 1930 and rose through the ranks to full professor. She retired in 1962. She then returned to Olivet (now Olivet Nazarene University) and taught mathematics for seven years. In 1970 she taught another year at Owosso College in Michigan. She retired to Wheaton, Illinois. She died in February 13, 1986 at a health care center in nearby Lombard.