On March 22, 2010, Dr. Nicholas Perrin, Associate Professor of New Testament, gave his inaugural lecture as holder of the Franklin S. Dyrness Chair of Biblical Studies entitled “The Bible from Westminster to Muenster: The Interface between Theological Confession and Free Historical Inquiry.” Dr. Perrin holds degrees from The Johns Hopkins University (B.A. 1986), Covenant Theological Seminary (M.Div. 1994), and Marquette University (Ph.D. 2001). His dissertation was “Thomas and Tatian: The Relationship between the Gospel of Thomas and the Diatessaron.”

The history of the Franklin Dyrness Chair dates back nearly a quarter-century to 1987 when the Class of ’27 alumnus and founder of the Quarryville Presbyterian Retirement Community contributed funds toward an endowed chair of biblical studies. C. Hassell Bullock was named the first distinguished chair until his retirement in 2009 after thirty-six years as Professor of Old Testament. 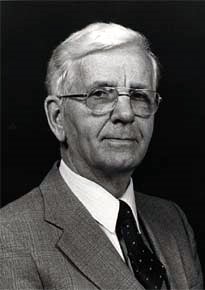 Franklin Seth Dyrness was born May 16, 1905 in Chicago, Illinois to Norwegian-born parents who immigrated to the United States. He attended Wheaton College was president of the Beltionian Literary Society, junior class president and played football; he graduated in 1927. He briefly taught science at the Wheaton Academy and was married to fellow classmate, Dorothy Rasmussen in 1931. They would eventually raise five children. Dyrness also graduated from Westminster Theological Seminary in 1931 and pastored the Chestnut Level Presbyterian Church in Quarryville, PA through 1936. He was then installed as the first pastor of an independent Presbyterian Church in later to become Faith Orthodox Presbyterian‎ Church, and then as Faith Reformed Presbyterian Church. He served as pastor for twenty-six years until 1963. Under this pastorate the church helped organize the Quarryville Bible Conference Association for the purpose of organizing summer camps and conferences for all ages. Dyrness served as its president for five years, and executive director for thirty-seven years. In 1948, he and a group of associates founded the Quarryville Presbyterian Home. Franklin held the position of president from 1948 until he retired in December 1985 at eighty-one years old. His honors include election to the Wheaton College Honor Society and the conferring of the degree Doctor of Divinity by Wheaton in its centennial year of 1960. On the 60th anniversary of his graduation from Wheaton, the Home and the College contributed funds to establish the Franklin S. Dyrness Chair of Biblical Studies at Wheaton College.

Surrounded by his family members, Franklin S. Dyrness ’27, D.D. ’60 died June 16, 1990, at the Presbyterian Home he founded in Lancaster County, Pennsylvania. In a letter to the Wheaton College Alumni Association, his son F. Seth, Jr. wrote…

We gathered around his bed and sang some of his favorite hymns for him. As we sang the final verse of ‘Rock of Ages,’ he closed his eyes and went to he with the Lord, It was beautiful and deeply comforting for us as a family. The funeral was a very uplifting time of celebrating God’s abundant faithfulness. Dr. Armerding preached an excellent message challenging us to faithfulness to Christ with eternity’s values in view. We are deeply grateful to God for giving us a father who taught us to put God first in our lives. Together with Mother and Dad, we thank God for the profound impact Wheaton has had on us in nurturing our souls and challenging us to follow Christ.