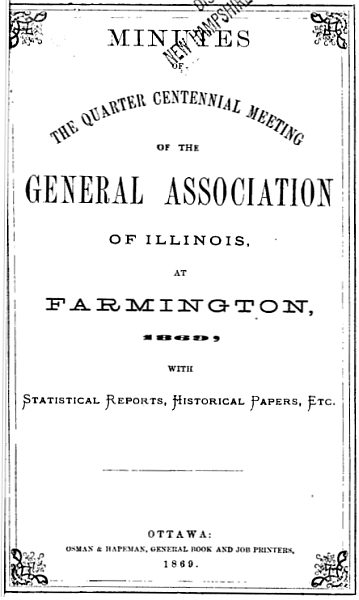 According to the minutes of the Quarter Centennial Meeting of the General Association of Illinois (1869), a Congregationalist publication, Wheaton College had survived their negative vote to salvage or aid Wheaton’s finances from ten years earlier. The school, under Jonathan Blanchard, had moved forward and began to grow. By 1869, it had, according to the author of the report, “enjoyed revival influences almost continually” and “their commencements are always largely attended, from three to five thousand people having been in attendance when held in a grove.” Additionally by the report, “they have graduated nineteen young men, eleven of whom are in or nearly in the Ministry, and twenty-two young ladies. All but one or two of their graduates were professing Christians.”

It is this last phrase that comes in the second to the last sentence of the report that can cause one to pause. Weren’t all students professed Christians? Who kept track of such things? How did one know?

Though as of this writing each student, as a part of the application process, expresses in writing a personal statement of faith and, thereby, each student could be described as a “professed Christian” this was not always the case. This explains why Wheaton held each spring Evangelistic Services that are now called Special Services. The change in the name of these spring chapel meetings came around the same time as the change in admissions practice of enrolling individuals who have provided expressions of personal Christian faith, the mid-1960s.