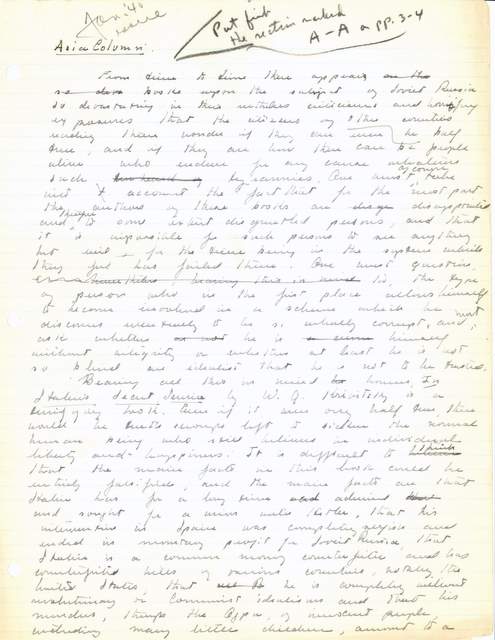 In recent days a collection of four Pearl Buck manuscripts have been placed on deposit at the Wheaton College Special Collections. These include a hand-written “Son of Fate” manuscript, “Cultural Contacts of the West with the Far East”, a typed speech given to the Cooper Union on February 1, 1944, and a signed autograph manuscript of her “Asia Column” from 1940. The featured “Asia Column” is five pages on 8.5 x 11″ three-ring paper with heading in Buck’s hand, and includes Buck’s signature, with cross-outs and rewrites by the author. In April of 1935, Buck took charge of the “Asia Book-Shelf” column for Asia Magazine, assigning books for review and writing many of the notices herself. In this five-page manuscript she choose four books for review that were incredibly significant and have been reprinted and still available since first published in 1939: In Stalin’s Secret Service (Krivitsky), British Diplomacy in China, 1880-1885 (Kiernan), A Japanese Village (Embree), and Five Miles High (Bates).

Pearl S. Buck (1892-1973), author and activist, was an ardent feminist and multi-culturalist. The first American woman to win a Nobel Prize for literature, she was acknowledged by most of her peers as one of the leading authorities on China and Asia. She had gone to China with her missionary parents at age three months in 1892. She was educated in the United States but returned to China afterward. Upon her return to the United States in the 1930’s, Buck found a country isolationist in thinking and parochial in world-view. With a characteristic energy, Buck and her second husband Richard set about making east and west better known to each other. Her work at Asia Magazine went a long way to assist in that task. (Conn, Pearl S. Buck: A Cultural Biography, p.181).