On the last day of March 1977 Jerry Hawthorne wrote from Cambridge, England to his colleague Gil Bilezikian. Hawthorne was abroad studying and wanted to alert him to a book by Howard Kee he had just finished reading. He wanted to be sure that Bilezikian was aware if he needed to include it in the book he was writing, later published as The liberated Gospel : a comparison of the Gospel of Mark and Greek tragedy. Hawthorne noted that Kee surveyed the literary antecedents of Mark, notably “Mark as ‘Greek Tregedy,’ Mark as ‘Comedy,’ etc.”

What is most notable about this brief postcard is Hawthorne’s description of Cambridge, which he said “is a wonderful place to retreat for quiet study–reading + research.” He spoke of going “into the bowels of the University library” and being taken beyond vaulted doors to be shown Codex D, the Bezae codex. He wrote to Bilezikian that seeing this 5th century vellum codex was “Priceless.” That postcard, shown here, is of the “famous reading from Luke 6:5 about the man working on the Sabbath.” He finished with an affectionate closing, “Love to you + all at Wheaton.” 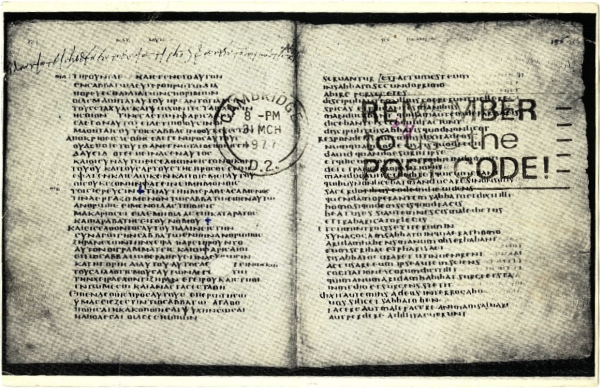 Little did Hawthorne know in 1977 that a home near Tyndale College, Cambridge would bear his name. In 1994 the warden of Tyndale House notified the college of the availability of a home within walking distance to Tyndale. It became clear to the college leaders that Tyndale desired Wheaton to acquire the home. Donors were approached and Wheaton purchased the home. President Duane Liftin recounted at the time that “a lot of people said, ‘I think this is a great idea.” The donor wished to express his affection for Hawthorne and name the four-bedroom house after Dr. Gerald Hawthorne, professor of Greek at Wheaton for over 40 years. Through this gift Wheaton’s faculty members on sabbatical can travel to Cambridge and have full access to the facilities of Tyndale House and the libraries of Cambridge University. Having used Tyndale’s library as an Oxford student, Litfin recalled that “there’s nothing like it. It’s the crossroads of the whole world when it comes to studies.”