This interview with Dr. Billy Graham was conducted by Wheaton College student Steve Gieser in Houston, Texas. The interview was edited from two sessions and published in the February 5, 1982, edition of The Record, the campus newspaper.

What impressed you most about your academic experience at Wheaton?

Wheaton was a tremendous time of intellectual expansion for me. I had always failed pretty miserably in my studies during high school. I was academically unprepared for Wheaton, but I soon caught on and became absolutely fascinated with some of my courses. I don’t think there was a single course that I took at Wheaton that I didn’t like.

What were your favorite courses?

I really enjoyed anthropology courses. That was my major. The professor, Dr. Alexander Grigolia, was a Russian immigrant to Germany and had two Ph.Ds and an M.D. degree. He was probably one of the most brilliant professors in anthropology in the United States at that time. 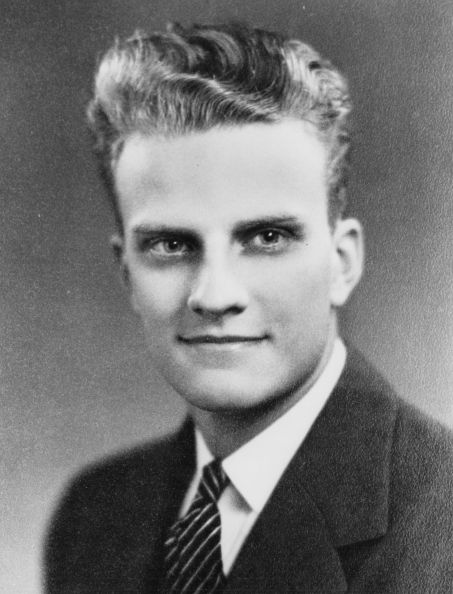 He was so absorbed in his subject that many times we would label him “the absent-minded professor.” These courses helped me in my world travels. I had no idea that the Lord was preparing me through these classes to learn to adapt to different tribal situations, different cultures, and different parts of the world that I was to preach to in the years to come.

What did you do besides study?

During my second year, on the recommendation of Dr. Edman, I became pastor of the Gospel Tabernacle. About 300 students and professors came every Sunday morning and evening. Dr. Edman had been the pastor. When he became the president of Wheaton College, he asked me to take over the pastorate. They paid me $15 a week, which was a big help to me in my schooling. I was also invited to preach here and there around the Chicago area. I even tried out for the wrestling team, but I failed. I was too busy. In addition to everything else, I worked on a truck for 50 cents an hour hauling furniture.

What advice would you give students who feel God is leading them into the ministry?

I think a solid grounding in Bible is very important. If you’re going to be a pastor, you need to know your tools. Most students who plan on being pastors go to seminary. And I would encourage them to do that.

Did you go to seminary?

No. That’s the reason I advise them to do that!

Looking back, do you wish you had gone?

Well, I think the Lord planned my life. If I had gone to seminary, I might have been put in a mold. Evangelists should have a little more flexibility. But, if I had done the choosing rather than the Lord, I would have gone to seminary. I think I did miss a great deal by not going. But I try to make it up in constant study and reading.

People often criticize Wheaton students for being “sheltered from the real world.” What do you think?

I would not categorically say that they’re too sheltered. It’s an individual thing. Wheaton, for many young people, is a transition period from what might have been a sheltered home to the real world. For others, the college is too sheltered. I think especially during the freshman and sophomore years there needs to be this transition period, because we’re really not yet adults in a sense, intellectually or emotionally, and I think this is where there needs to be guidance. In the Grecian days, one man would sit and teach with his pupils around him. It was the way that the teacher lived as much as what he taught his students. They were followers of a model. One of the things missing in modern education is this model of professors. Whether or not we are sheltered depends on the model that the faculty give the student. The responsibilty of a faculty member at a school like Wheaton goes far beyond just his ability to teach or his academic background, because the student is also watching how he lives. This makes a great impression on a student.

What are some of the most significant changes you have observed since your time here as a student?

Back in the forties, when I went to school at Wheaton, the mood of the day was that science was going to solve all of the problems of the world. The secular world almost worshiped at the shrine of science. Science has proven, on the one hand, to be a great and wonderful thing. On the other hand, because of man’s heart, it has proven to be a disaster. The age of technology has burst upon us with the blast of the atomic bomb. We can now destroy the world in just a couple of hours. We have the technological breakthrough just over the horizon that could bring paradise to earth. On the other hand, that same technology could bring hell to earth. Well, those thoughts were never in our minds when I was a student. We could get glimpses, but they were only glimpses. Today they are realities. I think we should be concerned about the arms race. I am glad to see President Reagan attempting to reduce arms with the Soviet Union. I think the people on this globe live in constant fear of nuclear war, especially in Europe. And I don’t blame them.

Do you think Christians should get involved in the prevention of nuclear arms?

Yes, I think we must speak out and make our voices heard. I’m not a pacifist, and I’m not for unilateral disarmament. I don’t believe America should tear up all of its arms. But I think we should talk with the Soviets on the destruction of nuclear arms. I don’t have too much hope that they’re going to reduce arms on either side. I think there must be a total destruction. But the possibilities of that are rather slim. The only person that is really going to answer this problem is the Prince of Peace. Still, in the meantime, we as Christians ought to pursue peace.

How should we do this? Should Christians try to influence politics?

Many religious groups have been active in politics for years. I think the Moral Majority has received a lot of publicity because it was really the first time conservatives became politically active.

Do you agree with the Moral Majority?

I don’t fault the Moral Majority for being political, but I don’t agree with the fact that I, as a Christian clergyman, ought to become involved in all these areas. We in the church should set moral guidelines for our leaders, and then let these situations be worked out in guidelines that are biblically based.

Did Wheaton shape any of your views of social action?

Yes. Going to Wheaton was a big turning point in my view on racism. Because when I studied the history of Wheaton, I began to realize that it was really started as an anti-slavery school. Jonathan Blanchard was very closely identified with the early American evangelist Charles Finney and the Beecher family in Boston. Harriet Beecher Stowe (author of Uncle Tom’s Cabin) had a brother that was a member of the first graduating class at Wheaton. The first time I’d ever gone to school with blacks was at Wheaton. This opened my eye to the fact that we are all equal. So from the beginning of my ministry, I began to take a stand against racism which was very, very unpopular. In the early 1950s in the south, I came under severe criticism.

What would you like to see changed about Wheaton?

Well, I don’t know that much about Wheaton, and this is a terrible thing for a board member to say. First of all, I’m not very comfortable being on the board at Wheaton. I was asked by Dr. Edman. I loved and respected him so much that I accepted, with the understanding that I could rarely attend board meetings, and could not keep up with everything going on. And this has proven to be true. I feel that a board member at Wheaton ought to become involved far more than board members are involved now. I think we ought to note student feelings, and have discussions with students, have discussions with faculty members, and get the whole sense of Wheaton before we sit in a board meeting.

The press seems eager to find fault with you. What’s it like to be in the public eye?

I have to meet the press wherever I go. They’re coming to my home all the time. For instance, the other week, both CBS and ABC spent full days at my home filming. From the very beginning I’ve been in the press. And I’ve run scared. I’ve never lost my fears that I would say something wrong or do something that would bring discredit on the name of Christ. So many people that are in the public eye have what is called “foot-in-the-mouth disease.” It’s very easy to catch. The problem is that the press often misquotes what I say. I have to constantly think, how is this going to sound out of context? When I talk to a reporter, I have to keep in mind that I can never say anything “off the record.”

Over the years, you have been close friends with several of the presidents. What kind of relationship do you have with President Reagan?

We’ve been friends for over thirty years. I met him through his mother-in-law, Mrs. Davis. We were in Phoenix, and I was playing golf. Mrs. David came out on the course and asked if she could see me. So after the game, I went inside and she said she wanted me to meet her new son-in-law, who had just been married for about a year. I said, “Who is your son-in-law?” And she answered, “Ronald Reagan.” “Oh, you mean the film star?” She said, “Yes,” and introduced me to him. That fall in Dallas, Texas, he and I were co-speakers. We became friends then. Ruth and I have visited the Reagans many times at his home over the years. Of the presidents that I have known, like Eisenhower, Kennedy, Johnson, Nixon, and Reagan, I was friendly with all of them before they became presidents. I met Nixon through his family. They came to nearly every evangelistic meeting held in southern California. One day I was eating with Senator Clyde Huey of North Carolina., and Senator Huey said, “There goes young Nixon from California.” I said, “Oh, I know his parents,” so he called Nixon over to our table. Nixon was very friendly and said, “I’m going to play golf and we need another partner.” So, that’s how I met him.

What do you do for relaxation?

I jog about two miles every day, even during crusades. At sixty-three, I think I’m in the best health that I’ve been in in my whole life. There’s nothing wrong with me anywhere, so far as I can tell. Except that I don’t have enough hours in the day!

In closing, what advice would you give us as students?

Well, I think the most important thing a person can get out of Wheaton is to develop habits of a devotional life of Bible study and prayer, because that will be your strength through all of your life.