William Evans, a native of England, heard D. L. Moody preach in New York City in 1890, and there received the gift of salvation in Christ. Advised by Moody to attend his new school in Chicago, Evans traveled to the Windy City, enrolled at Moody Bible Institute and graduated in 1892. He was, in fact, its first graduate. After a few years in various pastorates, he was appointed as Director of Bible at his alma mater. Aside from his classroom accomplishments, Dr. Evans contributed three lasting agents in the propagation of the gospel message. His first contributions were books titled How to Prepare Sermons (1917) and Great Doctrines of the Bible (1912), still in print through Moody Publishers. 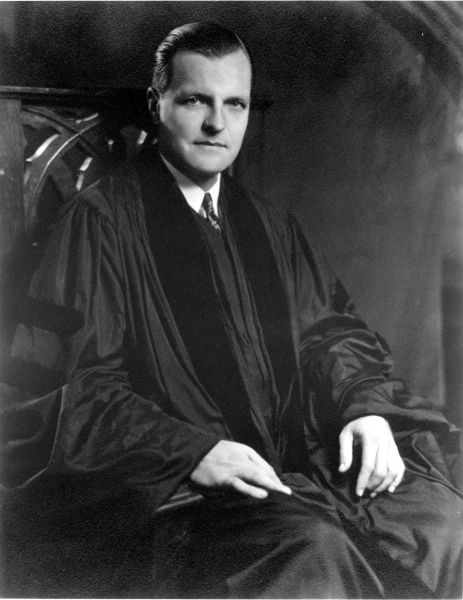 His other contribution was not a book but a son, named Louis Hadley Evans, who would one day be cited as one of the notable preachers of the twentieth century. Born in Goshen, Indiana, in 1897, Louis was raised in Wheaton, Illinois, in a house that stood on the corner of Franklin and Irving, where the Nicholas wing of Buswell Memorial Library now stands on the campus of Wheaton College. Louis attended Wheaton Academy, across the street from his home, for one year (1914-15), then later entered Occidental College in Los Angeles. A remarkable athlete, muscled and broad-shouldered at 6 ft. 4, he participated in football and basketball, winning multiple honors. After serving in the Navy during WW I, he acquired a theological education at McCormick Presbyterian Theological Seminary in Chicago. Ordained in the United Presbyterian Church, Evans led congregations in North Dakota, California and Pennsylvania. While serving as pastor at Third Presbyterian Church of Pittsburgh he received a call to Hollywood, California. Initially he found the request unappealing. “I said no at first when their call came,” he commented to Time magazine. “But later I realized it would be a burr in my saddle and that Hollywood would be one of the finest recruiting grounds in America. Also, I wanted to get my teeth into something.” When Evans assumed leadership at Hollywood Presbyterian in 1941, he found the church $250,000 in debt with a membership of 2,378. Within the first year the debt was wiped out, and for each successive year his parishioners topped their offerings, giving more than any other Presbyterian congregation in the U.S. As membership increased, swelling to the largest assembly in the denomination, so did Sunday School enrollment. Henrietta Mears, Director of Christian Education, was responsible for discipling these converts and implemented an engaging program that inspired hundreds of young people to enter full-time Christian activity; among these were Bill Bright, founder of Campus Crusade for Christ.

After serving for 12 years at Hollywood Presbyterian, Pastor Evans resigned in 1953, leaving a healthy congregation of 6,400 members. “It made a rancher out of me instead of a shepherd,” he joked. For the next nine years he traveled as Minister-at-Large for the National Board of the United Presbyterian Church, USA, speaking to universities, conventions and churches, often appearing on radio or television. As he journeyed from one engagement to another, his wife, Marie, usually drove as he sat in the back seat, tapping out sermon notes on a specially built typewriter stand. In addition to itinerating, he served as President Eisenhower’s summer pastor in Washington, DC, and was one of the co-founders and early president of the Fellowship of Christian Athletes. Life magazine named Evans as one of “America’s Twelve Outstanding Religious Leaders,” along with Billy Graham, Norman Vincent Peale, Fulton Sheen and George A. Buttrick. Writing eight books, he continued public ministry until four months before his death in 1981. His memorial service was officiated by Dr. Lloyd John Ogilvie, who also served as a pastor at Hollywood Presbyterian (1972-95) and eventually as Chaplain to the U.S. Senate. “Rolled into one man,” eulogized Ogilvie, “was the brilliance of an Apostle Paul, the impetuousness of a Peter, the love and tenderness of a Barnabas.”

The papers of Louis H. Evans, Sr. (SC-31), are archived at Wheaton College (IL) Special Collections. The collection is comprised of photographs, recordings and typewritten documents.